Enough of seriousness on spot-fixing in cricket. We thought we would bring some humour in the context. Here’s presenting ten tweets we found laugh worthy in an otherwise tension struck world.

Sir Ravindra Jadeja  (@SirJadeja)
Is a Towel ok? to  get the Aadhar Card picture clicked? – #Sreesanth

NimS ‏(@NimsPatel)
“Dupatta for ladies and shirts for men mandatory for Aadhar Card.” #Sreesanth can use his towel as a Dupatta no? # Aadhar Card

Atiya Zaidi (‏@atiyaz)
Dear Shakespeare,
There does seem to be something in a name.
Sree+santh
Sri+nivas

Kamaal R Khan – KRK (@kamaalrkhan)
If #Sreesanth is innocent as he is claiming then Sunny leone is still Virgin.

Faking News ‏(@fakingnews)
#Sreesanth agreed to #SpotFixing as he needed money to pay for a job in Indian Railways.

Tanmay Bhat ‏(@thetanmay)
Trying hard to think of a joke better than Sharad Pawar and N Srinivasan saying they have zero tolerance for corruption.

cypher_singh ‏(@imanish_singh)
Bhajji is the only cop who slaps a criminal even before he could commit a crime. Sir Jadeja level breached. #ipl6 #sreesanth

Ramesh Srivats (@rameshsrivats)
Bookie: So, what plan today? #Sreesanth: I’ll get smashed for over 10 runs per over. B: Ok. So, you’ll bowl badly? S: No, no. Normally.

Hoping you enjoyed the Twitterati’s take on Sreesanth’s towel antics. We especially loved the Harbhajan wala from Cypher Singh. Look at this space for more on such great comedy tweets.

Sampurna Majumder narrates her ‘bitterly-wonderful’ experience of getting drunk in the fourth part of Dilli ki Hawa!

College life and teenage can make us do weird stuff at times. Sometimes. I remember the day I got terribly high for the fist time. I was pursuing my Master’s and had just completed by 21st birthday. D, S and I were flatmates. Every month we ended up throwing a small party at our den. Party without some tit-bits is definitely incomplete. We usually got chips, spring rolls and soft drinks as our accompaniments and of course the party comprised gossip sessions and sometimes stupid games.

It was one such party which was a little different from the rest. This time three of us tried our hand at vodka. On D’s suggestion we decided to go the nearest local liquor store at north campus. For the first time we stepped into a liquor store. Three of us were a little perturbed as we could feel pairs of eyes ogling at us. Hurriedly we placed an order for a small bottle of vodka and returned home with our prized possession including chips, a bottle of limca and a few other tit-bits.

An hour later we spread out our accompaniments for the evening. Conversations started pouring and so did the vodka. The first round comprised vodka with limca. This was followed by a second round of the same. D had already started feeling a dizzy we could make that out pretty well from her occasional laughter and bitching about her ex-flames.

The vodka bottle was still more than half-filled. All of a sudden D threw a challenge, “who can finish the rest of vodka?” . We stared at each other and by that time the mixture of limca and vodka had already started taking its toll on me. I could feel it. However, I tried to be the brave one and before either of them could decide upon, I took the plunge.

After that all I could remember was D and S helping me lie down in the bed so that I could have a good night’s sleep.

Next morning D and S narrated what exactly had happened. I had lost complete control of myself and was crying hysterically. God knows why? And the episode doesn’t end here. I was told that I started throwing up badly and it was all over D; so much so that she had to take bath in the December winters of Delhi. I tried falling back on my last night’s memory and I could vaguely recollect the throwing up!

“How I wish I had not thrown such a challenge!!!”. D lamented.

Geetha Krishnan counts her blessings and thanks the Almighty for the wonderful gift called Life!

Thank you God for my life and all the love,
For making me happy when I see a rose or a dove.
For letting me enjoy everything I have when I live,
Grateful for my wants which are lesser than what you give.

For eyes to see my loved ones and for hands to do my own work,
To read, to cook, to paint to laugh…to do all the things I care about.
To enjoy my day, to smell the blooms, to see the sun shine and the birds fly too.
To talk, to love, to hug, to kiss…I have everything I want, I am blessed…isn’t it?

Thank you for my parents who cared enough to correct me as I grew,
Who taught me to think for myself…to decide what is wrong and what is true.
Thank you God for the love in my life, yes, I am a mother, a sister and a wife.
Thank you for friends who always love, support and encourage,
I know I am far from perfect…I just try to be ME on my life’s stage.

Kartik Kannan’s continues his photographic journey of Dudhsagar in this fourth part of the series! 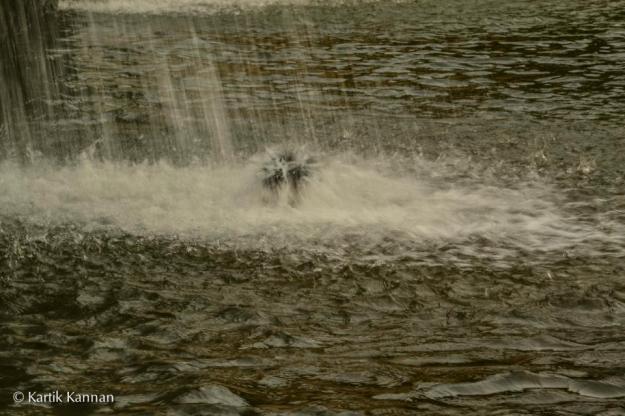 One interesting game to play at the base of the waterfall as a group is to dunk into the water, and hold your breath, and then come out. The one who spends least time inside, has to photograph the rest, for the next iteration.

Another interesting thing worth observing are the patterns of water when people splash about in water.

Do watch out for the contrast between water against the rocks, and the bright sunlight on the other rocks.

For Photography enthusiasts, this is a good opportunity to use a slow shutter to capture the motion of the water.

If you are getting too much light because of a long exposure, it may be wise to carry along a Neutral Density filter for your lense, so as to cut off unwanted light by 2 F stops.

We laughed at him because of this dressing sense…made fun of his mannerism because it seemed strange to us…loved his films because they were par excellence…and today, we cry at his passing away at such a young age! Of course, we would have mourned his passing away at any age; simply because, icons such as he are rarest of the rare.

For most of us, Rituparno Ghosh was a butt of ridicule when alive! However, hearing of his sudden death evoked a strange sense of loss in me. My first thought was “Oh no! This is not true!”

What was in this man that brought out such personal feelings in an otherwise impersonal person like me? Is it because he made path-breaking films? Or, is it the sensitivity he showed towards the female characters in his films? Or, is it because he had the courage to live the life of a non-conformist – something that probably all of us wish to do but are not able to do so?

May be, it is all of these and more that actually made me feel sad. His erudition, his understanding of human nature, his ability to set trends and the fact that he exhibited the

kind of potential that Satyajit Ray and Mrinal Sen did – had kept everyone enthralled and in his grip. The Indian film industry – irrespective of its spatial location – had always been male-centric. He was one of the very few directors who offered splendid roles to women – be it Aishwarya Rai, Indrani Haldar or Ananya Chatterjee.

With Rituparno Ghosh’s death, another era in film-making has passed away! At this point of time, I am reminded of Steve Job’s Stanford Speech of 2005. Therein, he had said that “death is the destination we all share…no one has escaped it…it’s the single-most best invention of life…it’s life’s change agent…it clears up the old to make way for the new…your life is limited so don’t waste it living someone else’s life….”

Perhaps, great men from all spheres of life think similarly! I SALUTE Rituparno Ghosh for being what he was and for doing what he thought best!

So if you thought only you have nicknamed your favourite players and love calling Yuvraj as Yuvi and Sachin Tendulkar as Tendlya, think again, another band and this one for commercial reasons also use nicknames for them. Check out the list below as aggragated from media sources.

This is the third part of the series – by Sampurna Majumder 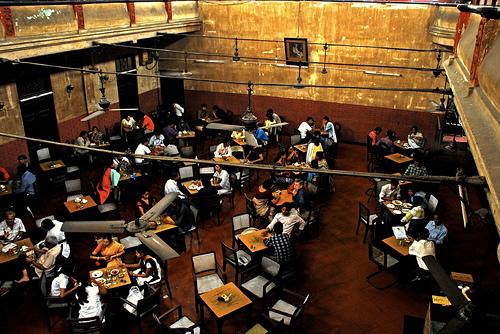 Days passed by. Our bonding became stronger with each passing day. It was K, S and I. Three of us became almost inseparable. Be it bunking classes, or bitching about classmates, or cursing the political system, complaining how back-dated the university is and possibly doing nothing about it…. All this and much more.

Communism has been ruling Bengal for more than three decades. The air around was stiff. We did not even spare that. Cursing the communist rule which possibly ‘ruined’ the state. I could feel the typical ‘Bangaliana’ seeping in to me. I was enjoying every bit of it.

K and S had a fairly good understanding of  the typical Bengali adda. Every time we met it was definitely a treat for me as well as a learning procedure. I learnt that the young Kolkatans had the habit of addressing their seniors as dadas and didis, instead of addressing them by just their first names. I seemed quite funny to me. The idea seemed funnier when they revealed that junior girl students from the departments even dated their so called dadas. I wondered if any of the bhais ever dated their didis or not?

Once we decided to the renowned age old Coffee House. I was quite excited about my maiden voyage to this famous eatery. We walked towards the connector of Bankim Chatterjee Street, where the Coffee House was located. The entry of this grand joint deserves mention. The walls on either side of the staircase seemed to resonate history. History was vibrating form every corner of this building. As we went inside, a completely new world welcomed me. Totally mismanaged  tables and chairs. No one ever seemed to fix them. The place was booming with life. People from all ages and walks of life were to be spotted. K and S told most of the Kolkata aantels, ( a term used to describe the Bengali intellectual) both the ripe ones and the ones in making were to be spotted here.

We bagged a table and fitted ourselves comfortably. I ordered for a fish kobiraji and not to mention a cup of coffee. I was told that the kobiraji is a must try here. Suddenly I felt a little lost. Despite spending the formative years of my life in this city, somehow these little things were absolutely alien to me. Random thoughts passed through my mind when all of a sudden S pointed towards another table positioned diagonally opposite to us. Five Bengali aantels were engrossed in a serious argument about who is a better romantic poet, Keats or Wordsworth. One argued about Keats’ idea of ‘beauty is truth, truth beauty’ while another supported Wordsworth’s views on Pantheism. The third guy emphasized the importance of Keats’ theory of Negative Capability while Wordsworth’s idea of a poem being ‘emotions recollected in tranquility’ scored with the fourth one. K and S turned to smile at me. I was thoroughly enjoying it.

The fish kobiraji had arrived along with the cups of coffee. We three lifted the cups to make a goodwill gesture just as one does before sipping on a drink. It’s never too late to begin. I was on a high with the idiosyncratic Kolkata Kulture.