Here’s presenting the second part of the three-part series on Street Cricket in India from Jack Hoyle. Watching these pics and his travel, one thing is sure, he definitely has a good book in his camera.

The batsman makes a dash for it and picks up a quick single.

Any patch of land will do. A recently ploughed field hosts an impromptu game.

The ball gets lost down a rabbit hole

A young batsman takes a swing.

That’s what mostly happens in the ultra-short format on the streets. A big swing and a miss.

No space is free from cricket. Local common ground in Khajuraho is taken over by a group of cricket players.

Ankush Kumar writes an open letter to the one he thinks is “India’s Most Concerned Citizen”, Arnab Goswami. Ignore a few typos because of the format.

Enough of seriousness on spot-fixing in cricket. We thought we would bring some humour in the context. Here’s presenting ten tweets we found laugh worthy in an otherwise tension struck world. 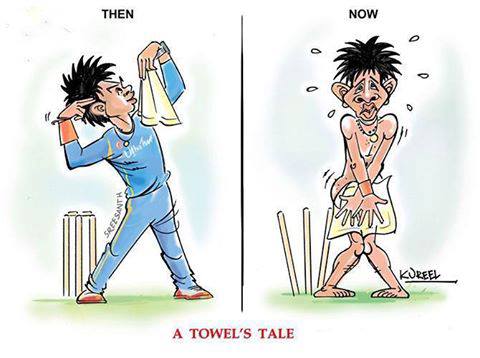 Sir Ravindra Jadeja  (@SirJadeja)
Is a Towel ok? to  get the Aadhar Card picture clicked? – #Sreesanth

NimS ‏(@NimsPatel)
“Dupatta for ladies and shirts for men mandatory for Aadhar Card.” #Sreesanth can use his towel as a Dupatta no? # Aadhar Card

Atiya Zaidi (‏@atiyaz)
Dear Shakespeare,
There does seem to be something in a name.
Sree+santh
Sri+nivas

Kamaal R Khan – KRK (@kamaalrkhan)
If #Sreesanth is innocent as he is claiming then Sunny leone is still Virgin.

Faking News ‏(@fakingnews)
#Sreesanth agreed to #SpotFixing as he needed money to pay for a job in Indian Railways.

Tanmay Bhat ‏(@thetanmay)
Trying hard to think of a joke better than Sharad Pawar and N Srinivasan saying they have zero tolerance for corruption.

cypher_singh ‏(@imanish_singh)
Bhajji is the only cop who slaps a criminal even before he could commit a crime. Sir Jadeja level breached. #ipl6 #sreesanth

Ramesh Srivats (@rameshsrivats)
Bookie: So, what plan today? #Sreesanth: I’ll get smashed for over 10 runs per over. B: Ok. So, you’ll bowl badly? S: No, no. Normally.

Hoping you enjoyed the Twitterati’s take on Sreesanth’s towel antics. We especially loved the Harbhajan wala from Cypher Singh. Look at this space for more on such great comedy tweets.

So if you thought only you have nicknamed your favourite players and love calling Yuvraj as Yuvi and Sachin Tendulkar as Tendlya, think again, another band and this one for commercial reasons also use nicknames for them. Check out the list below as aggragated from media sources. 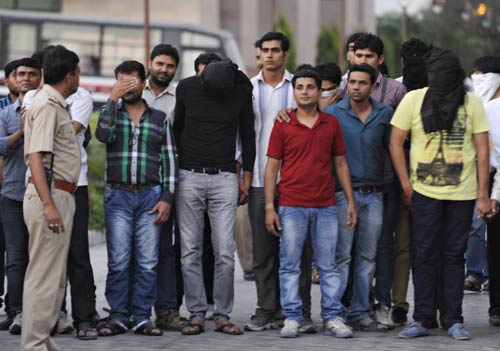 The latest spot-fixing saga involving Test cricketer S Sreesanth and two other players has brought the negative focus back on the IPL. A tournament which could otherwise be such a great one internationally to unearth exceptional talent is being bashed for poor governance. I still feel, blaming the IPL for something that has plagued the sport for decades is hypocritical to say the least.

Now let’s be honest, when was the last time we heard of spot-fixing. It was with Pakistan bowlers Mohd Asif and Mohammed Aamer bowling no-balls against England in England. That was also not the first time it had happened. The relation between all sports and betting is probably as long rooted in a sports’s history as its origin and existence. Which means way before IPL was even thought of, so why make it a scapegoat. Just because there is huge money involved and its a franchise system with big names does not mean we blame all corruption on it.

Frankly, match-fixing is a much bigger malaise and we had evidence against match-fixers from India from 1999 onwards. What happened to them? Someone’s a politician and many are actually commenting on the sport today, having remained scot-free with no one being able to catch them from their collar outside a court complex. Did we ban Indian cricket then, did we put a temporary ban of even 5 years on it? So why now the IPL.

The IPL is certainly one of the best breeding grounds for talents. Players not only get a chance to showcase their talent on the world stage, play with the best of international folks, learn from them but to add to all this, make loads of money even without being lured into heinous activities like the one that came to light yesterday.

What is more important to understand is that all ponds have bad fishes and the need to the hour should always be to find those and fix them, rather than emptying the pond and making thousands dependent on its water die of thirst.

I loved one tweet yesterday which said and I quote “for every Sreesanth and Chandila, there are folks like Dravid and Warne” which basically means there are enough examples to look up to and feel that the game is not tarnished because of a few bad examples. Like every industry and like life in general, there would be rough times, the tough ones have always survived though.

PS: For anyone who thought I am an IPL fan, rest assured, I am one of its staunchest critic. Unfortunately though I am still sane to know where to fix the blame and where to worship. 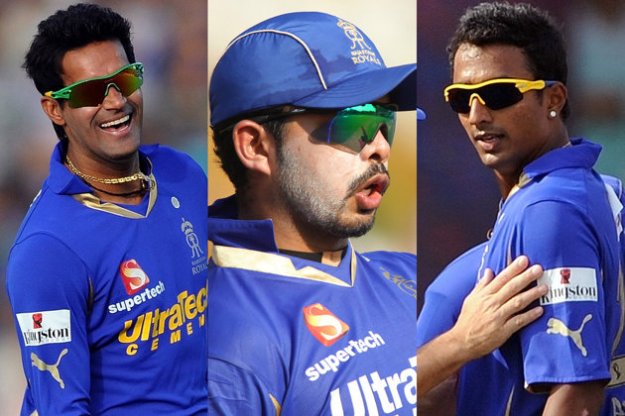 The spot-fixing arrests of Sreesanth, Chandila and Chavan goes to prove that the BCCI’s ‘zero tolerance’ policy is a joke, when combined zero information and zero transparency, says Jaideep Ghosh 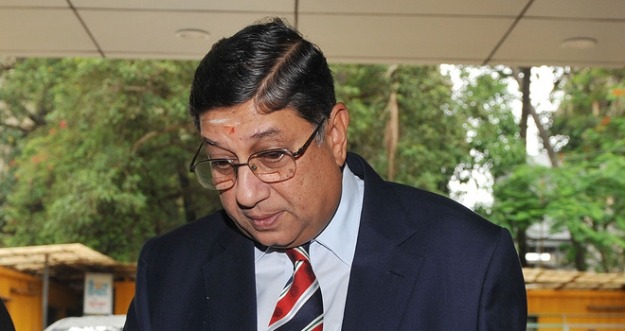 BCCI boss N. Srinivasan, in a pretty hastily-organised press briefing, reiterated what we already know, while it also threw up a few more enlightening points.

Let’s start with the two statements of novelty. The first jewel is that the Indian Premier League is not corrupt, cricket is. Thank you sir, for making that distinction. We were seriously beginning to presume that IPL indeed WAS cricket. Now we know better.

The second is the expression of shock that an international player had been arrested. So the BCCI was a little happier that those hauled up before were people of lesser denomination? That is bigotry.

The rest was business as usual – beginning with ‘shock’ at the ineffectiveness of the BCCI’s Anti-Corruption Unit.

But what is new there? BCCI or the International Cricket Council (ICC) anti-corruption units have been ineffective at the best of times, especially since the ‘zero tolerance’ is never initiated unless some police force – be it in India or England – throws up yet another fixing scandal.

We hope that they are just incompetent and not actually sweeping such incidents under the carpet. That would indeed be a crime, much bigger than the one the three players have been charged with. Or others, over the years.

But one thing we agree with. Srinivasan says Indian players are paid enough. In fact, it would suffice to say they are paid obscene amounts by cricket and IPL (the distinction having been decisively established).

So how much money then, is too much? Evidently, there isn’t a limit. If the three are indeed guilty, one needs to see what their pay packages were in the IPL, or in international and/or first-class cricket.

But lure of money isn’t really the problem here. The problem is that the game’s governing bodies have been criminally lax when it comes to enforcing any sort of discipline in this area, a fact enhanced by the fact that the arms invested with power to take action are largely useless.

Over many assignments all over, yours truly has often seen this ACU official checking-in into five-star hotels with a very sleuth bearing and a mysterious smile. Then he vanishes from the scene, with equal mystery. But I guess detectives can be expected to be undercover. 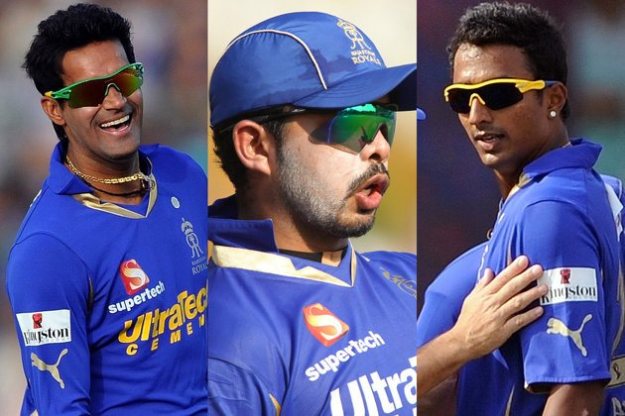 Listening to the chatter on social media on the spot-fixing controversy that has just erupted in the IPL, it makes sense to actually make people understand what the term really means. This post breaks it into what can easily explain the concept.

So S. Sreesanth, Ankeet Chavan and Ajit Chandila have been arrested on charges of spot fixing. Poor Sree, am sure that was the only way he could have looked forward to making quick bucks considering his extremely awry performance on the ground off late. Feel pity though for the other two as they fall prey to this evil at a stage where they could probably never come back to the game. Criminal activity though and has to be punished.

So what exactly is spot fixing? A few months back Pakistan bowlers Mohd Aamer, Mohd Asif and batsman Salman Butt were embroiled into something similar and we all know what has happened to them. They actually were caught on camera accepting money to bowl no-balls. The result of the match though was not a bet. Spot-fixing thus is not something that directly impacts the result of the game.

In his famous book “Gambler, Bookie, Fixer, Spy, a journey into cricket’s underworld”, author Ed Hawkins clearly demarcates between Spot and Match fixing. He says while we all know what match-fixing is, spot fixing is generally not fixing the result of the game but fixing “brackets” of the game.

This kind of bracket fixing is done for a period of overs, say 5 for example in which a bettor can bet on the number of runs that will be scored, number of wickets that will fall and so on and so forth. This bracket is a flexible one and changes with the number of runs scored in one over and the next over and then on. So basically if many bettors put a lot of money on a certain result in a bracket and the bookies fix-up the players to do the opposite (spot-fixing pays are pretty less), makes tremendous financial sense, doesn’t it.

Plus, with the kind of power hitting and fall of wickets that happen during a T20 game, something of this sort does not even raise eyebrows of the franchise owners, spectators and even the Police. With little loyalty quotient in a franchise model, the prospect of someone falling prey further increases.

Though the investigating bodies have done a fantastic job in nabbing the culprits pretty fast, it will still be better if someone can devise a method to fullstop these things. Utopia though is only a distant dream. IPL is anyways shrouded with hundreds of controversies, this does not help any bit to the brand value.