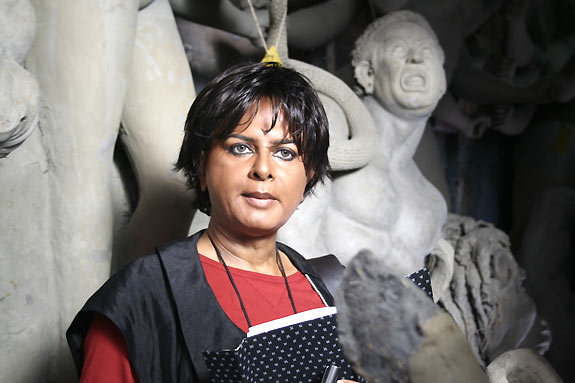 We laughed at him because of this dressing sense…made fun of his mannerism because it seemed strange to us…loved his films because they were par excellence…and today, we cry at his passing away at such a young age! Of course, we would have mourned his passing away at any age; simply because, icons such as he are rarest of the rare.

For most of us, Rituparno Ghosh was a butt of ridicule when alive! However, hearing of his sudden death evoked a strange sense of loss in me. My first thought was “Oh no! This is not true!”

What was in this man that brought out such personal feelings in an otherwise impersonal person like me? Is it because he made path-breaking films? Or, is it the sensitivity he showed towards the female characters in his films? Or, is it because he had the courage to live the life of a non-conformist – something that probably all of us wish to do but are not able to do so?

May be, it is all of these and more that actually made me feel sad. His erudition, his understanding of human nature, his ability to set trends and the fact that he exhibited the

kind of potential that Satyajit Ray and Mrinal Sen did – had kept everyone enthralled and in his grip. The Indian film industry – irrespective of its spatial location – had always been male-centric. He was one of the very few directors who offered splendid roles to women – be it Aishwarya Rai, Indrani Haldar or Ananya Chatterjee.

With Rituparno Ghosh’s death, another era in film-making has passed away! At this point of time, I am reminded of Steve Job’s Stanford Speech of 2005. Therein, he had said that “death is the destination we all share…no one has escaped it…it’s the single-most best invention of life…it’s life’s change agent…it clears up the old to make way for the new…your life is limited so don’t waste it living someone else’s life….”

Perhaps, great men from all spheres of life think similarly! I SALUTE Rituparno Ghosh for being what he was and for doing what he thought best!