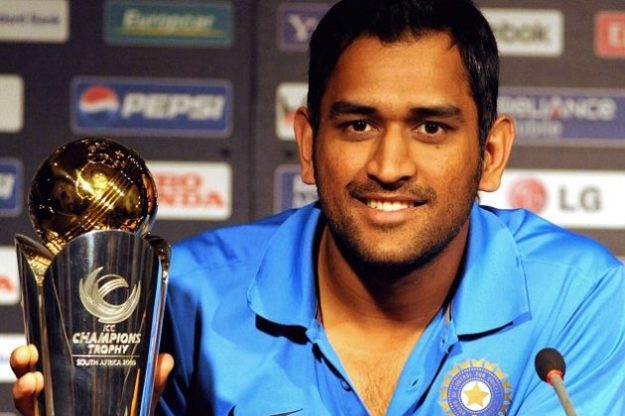 Ankush Kumar tells us why some fans will always cheer for Team India and nothing to the tune of fixing, conflict of interest and media hype will bother them

The only conflict is his interest in the success of Team India perhaps. The silence at the final press conference before MSD left for English shores was a damp squib. The media still generated their masala and hounded him no end. His integrity was questioned; social media and its lame authors nailed him from all quarters.

MSD and his boys were cornered tigers, and like they do a step backwards was taken. Only to make a giant leap forward and here they are crowned winners of the last edition of the champions’ trophy.

The final yesterday was robbed of a great contest by the weather. For a long period the beer in the refrigerator disappeared with each thundershower that hit Birmingham.
By the time the contest actually began I was left sipping only cold water. Mind you that was equally intoxicating as India scripted a win from the jaws of defeat.

Last time when South Africa choked at the international stage, England was their nemesis. This time the English relived the same tag that has haunted them since 1979. If ever a time machine is invented, England should go back in time and erase the memory of inventing the sport.

They way they have lost big-ticket finals since 1987; they don’t deserve such great tags. India on the other hand played outstanding cricket from the word go. When they won the first two warm up matches, lot of us felt they were flattering to deceive. But the way they romped home against quality sides reconfirmed their tag of being the number one ODI side in world cricket today.

Today as it stands MSD has become the first captain to win all major ICC titles; this would not have been possible without the support of the technical team yesterday.
The ICC goofed up for not having a reserved day for a big final, but quick thinking by them ensured that we at least had a rain-curtailed match. The high drama in those forty overs was enough for the audience who had waited patiently to make their monies worth.

Last time when Team India won the CWC, Nasser Hussain had said ‘since they haven’t beaten England the win is not complete’. Today as it stands sir ‘Shut up & Bounce’. Every time the sport has hit by an alien source, Team India, has countered the demons and come out triumph. This one though is sweeter as it has come in overseas conditions. Well not quite! Yesterday Birmingham looked more like the Wankhede stadium in Mumbai than in England.

It turned out to be home territory for us. The crowed jeered the Pommies and cheered us. The pitch that should have been bouncy turned square, Alaistar got cooked and MSD was yet again crowned Mr. Cool!

Captain Cool did not miss an opportunity to thank the BCCI for their contribution in developing great infrastructure that has helped Team India grow as a fielding unit. He in a very subtle manner also highlighted to the west that ‘India are the big daddies of world cricket today’.

This victory means a lot to fans like us, who have stood by our heroes in times of crisis, we have never questioned the integrity of our soldiers, we have always believed that theories like conflict of interest or scandals like spot fixing can never be a deterrent for the love of the game, and today our superstars have repaid us back by not just winning the championship but by doing it in style.

P.S: England is supposed to be the mecca of cricket, but it’s Team India that ‘Lords’ over the world today.

These are 10 great tweets about Dhoni’s Silence act at the Press Conference today. Must read.

Kunal Pradhan (@_kunal_pradhan): Another demonstration of how nothing will ever change in the Indian cricket. #ipl #Dhoni #Srinivasan #bccirot

Shashank Sourabh (@shankyn): @bhogleharsha so do u jst write moral stories in ur books or do u hav an opinion abt d farce indian cricket hs become. #dhoni #disappointed

And media was also not let go

Rohit (@rohitsakunia): If the press was so angry on #Dhoni not responding on #spotfixing why didn’t they walk out. They should have na

Back to MS though and there were some who also dragged BJP and Mrs. MS Dhoni

gurujoth_kohli (@gurujoth_kohli): #Dhoni MUM on Questions posed by the Media abt IPL.Will the #BJP ask for his resignation?Or stall the Parliament for this #JustAsking??

Saurabh Gandhi (@gaggycool): When Sakshi said ” Kuch toh log kahengay” , it was probably a cue for Dhoni to shut up. #dhoni

Vikram Sharma (@vikram_sharma09): apart from Azhar, only other Indian cricket captain who has been so hand in glove with establishment & under an ethical cloud is #Dhoni

And lastly came the fans. Oh how poor Indian cricket would be without us and them.

Pranay Mehta (@PranayMehta_PM): People who are criticising MS Dhoni are the same people who know zilch about how he led India to WCs & No. 1 in all formats! Respect #Dhoni

Ankush Kumar in the second part of his article on Sachin Tendulkar talks how hollow Indian cricket fans become when they criticise the only man who continues to be in the side even when the other 14 have changed on multiple occasions in the last two decades.

Sachin Tendulkar is on fire’! He has stroked a master class century. Oh! Now surely India will lose the match. Tendulkar and centuries is jinxed. Knock! Knock! (Critics) have you ever held a bat in your hand, and more than 40 million fans hooting for you in the ground? Have you ever imagined that red/white leather ball hurling towards you at a speed on knots? I am sure the answer is a BIG NO!

You actually haven’t managed to even become the ‘TENDULKAR’ (how ironical Na) in your gully cricket team. Before you jump to illogical analysis, please verify facts, and in your defence stop comparing him to other match winners. Because (critics) there was a time for a good period of eleven years, where the ‘MASTER’ was a one man army.

The other day I met a journalist. He had a very profound (according to him) theory on the ‘master’. He said ‘someone who does just one thing for twenty two years’ is supposed to perfect the art. Sachin Tendulkar is just an average cricketer’. I checked the background of the journalist, he came from a defence background, and it established the theory ‘that these people have their brains in their knees’.

This post is being written at a time when ‘Indian cricket yet again is going through a crisis’. The critics have also raised eyebrows on the man saying ‘he is prolonging his retirement because of his endorsement contracts’. Really! Do you people have absolutely no work?

When our generation started watching cricket, one advertisement was very popular, that of Sunil Gavaskar donning suits for a brand called DINESH. The cricketer was well past his playing days, endorsements were not as big as it is today; still the man was a face on national television. You really think that the ‘master’ will not be a face to reckon with post his playing days?

Critics have argued, the man plays only for records. OH GOD! I feel like taking a chopper and you know what follows! (Hope you do). In a country where the population exceeds a billion, only fifteen chosen ones play for the ‘INDIAN CRICKET TEAM’. Out of that, fourteen faces have changed in the last two decades, but one face remains constant and that is of the ‘Master Blaster’. Someone who has stayed in the game for so long and played with the highest pedigree all records are meant to be his. Isn’t it?

Critics, when was the last time you were the cynosure of all eyes? Perhaps on your birthday but even that lasts only for twenty four hours. Or maybe your marriage, but even that lasts till your better half arrives on the scene. But this man has been India’s favourite ‘Son’ for twenty two years. Even today as the man nears his end, he boasts of a fan following cut across all generations.

Hence next time you raise your stupid arguments on the man remember your work is to ‘throw stones on the man, and his duty is to convert them into milestones’.

Sahara pulling out of the IPL as well as the Team India contract at the end of the year comes almost as a natural sequence to the fixing scandal and potential threats of more exposures, says Jaideep Ghosh

The Sahara India Pariwar isn’t quite in the best of health financially, that is no secret. On the contrary, what surprises people is the fact that they seem to be able to conjure up immense amounts of money from the proverbial thin air. But that magic trick is obviously not working too well now. Pune Warriors alone cost Sahara Rs 1700 crore. Then we have other assorted commitments – hockey is one, though that is loose change for the Sahara Group. 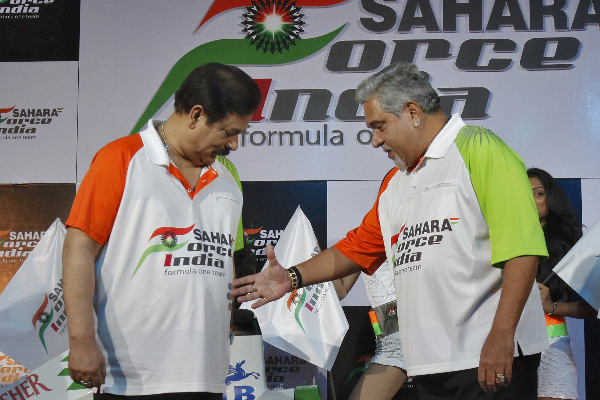 The other big thing is the Formula One deal, where Vijay Mallya virtually hypnotized Subroto Roy Sahara into dishing out some obscene amount to get a sticker on the Force India car – a barely-visible sticker. Then of course, we have assorted commitments like sponsoring the Bangladesh cricket team.

All of this shows just one thing – having money does not necessarily mean being able to spend it. On the flip side, from the BCCI’s viewpoint, there is only so much arrogance that anyone will take, especially those investing millions of dollars in what is essentially the BCCI’s domain, without any arguments.

Sahara has a record of pouting and walking out, like they did in 2012. That didn’t evidently come as ample lesson for BCCI, who encashed their bank guarantee, almost instantly, the moment the deadline for the contentious franchise fees had ended.

Also, Sahara, already under the microscope, would definitely be in some rush to dissociate from anything that looks shady – which the IPL has become in a span of just two days. So this is a good time to take a hike which serves two purposes.

For one, Sahara managed to jolt BCCI again. The second is that they have wriggled out of what was a disastrous deal for Pune Warriors. That they did it like some small-time retailer reflects the general mindset of the company.

There is a third thing too. God forbid any Pune players are hauled up by any of the state police forces (after all, you can only fix to lose, and who loses more than Pune?); Sahara can say they aren’t in the mix any more. As it is they don’t need more bad publicity.

The sad fallout of it all is that what used to be a sport is fast becoming a joke. Sure, marketing forces will make it a saleable property again soon (read, as soon as the IPL ends and the action shifts to the Champions Trophy), but that doesn’t take away from the fact that cricket by and large is played in a shadow of illegal or not-so-legal activities. And no one can change that in a hurry. 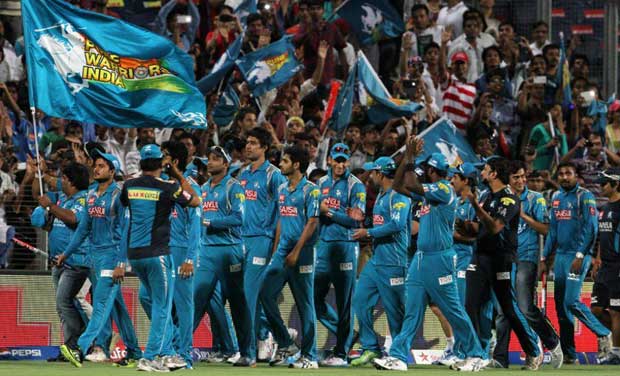