Chandan Das wonders about the reason due to which we were not able to take requisite action despite Nature giving us timely warnings, in the fourth part of the Uttarakhand Floods series.

“For I have learned to look on nature, not as in the hour of thoughtless youth, but hearing oftentimes the still, sad music of humanity.” – William Wordsworth

UTTARAKHAND is PRONE to Natural Disasters: So what?

Ok I agree to the fact that the very nature of topographical, geological, geomorphological and seismic situation in Uttarakhand makes it prone to large kinds of disasters. It is part of young Himalayan mountain, prone to landslides, erosion and flash floods.  And this is not something new. Similar disasters have been found in other countries like China, Italy & USA and even in UTTARAKHAND, the Asiganga hydropower project had played a key role in the Uttarkashi disaster a couple of years ago. I mean you cannot avert a cloudburst, but you can certainly reduce the damage!

Not that Mother Nature did not give any timely warnings. Through the years, since the 1991 Uttarkashi earthquake that left nearly 2,000 dead and thousands without shelter in the Himalayan state, there have been several warnings, such as abnormal rise in temperature, reoccurring landslides, cloud bursts and flash floods in vast regions of Tehri, Pauri, Chamoli, Uttarkashi and Almora. The headlines three years ago were similar: ‘flash floods leave North India in deep trouble’ and ‘flood, rain, wreak havoc in North India’. The monsoon of 2010 brought with it such massive losses of lives, property, crops and infrastructure that the state said its development clock had been set back by a decade!! In August 2012, buildings were washed away by Uttarkashi flash floods. Immediately after that, the Uttarakhand government report actually asked for a legislation and its strict implementation to ensure that no construction, including roads are allowed next to the river. As per official records, 233 villages were marked  disaster-prone and could face Uttarkashi-like situation any moment. Sadly, two months later, a cloudburst in Rudraprayag had claimed 69 lives (the very same place where the Disaster started). 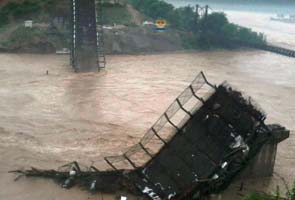 It may be some consolation that nature’s fury is not well handled even by some of the most advanced industrial societies, as demonstrated by Hurricane Sandy in New York last year and Katrina earlier. But we should at least try and be prepared by rechecking urban water draining infrastructure lest we suffer due to the monsoon that is in fact our saviour. But nobody, barring a handful of environmentalists, ecologists and local people, paid heed to the warnings. A place that is prone to disasters because of fast-occurring climate change should be guarded with utmost sensitivity towards ecology and environment, but the administration closed its eyes to all illegal constructions!!

So was it just a nature’s fury or have we dug our own graves ?

Floods and landslides have wrought havoc in Uttarakhand and Himachal Pradesh. Submerged houses, floating buildings and corpses gives the feel of the D-Day! Here are some images of the flood which evokes pathos and fear. 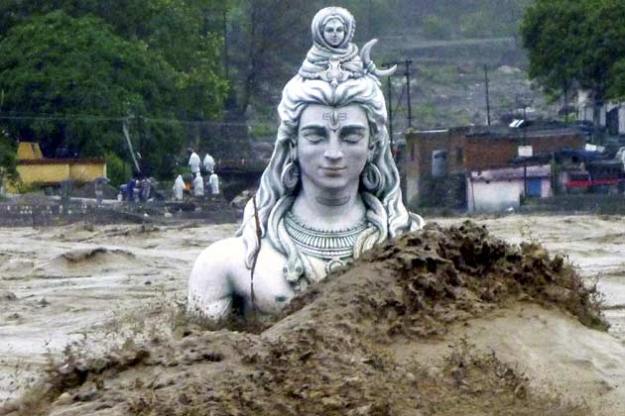 Rishikesh: There couldn’t have been greater irony! The Lord of Destruction, too, caught up in the midst of  destruction and devastation.

Houses partially submerged due to the torrential downpour!

People remove their furniture from their homes as the water level rises. 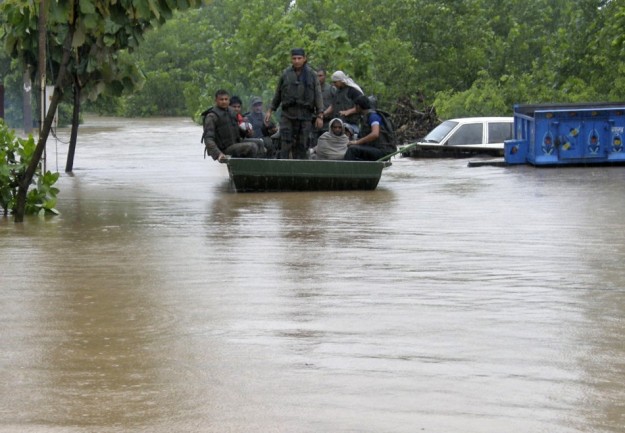 Army swings into action for relief from flood.

Buildings topple into the river and is washed away by the current.