I love garlic. I love Chicken. So, this time I thought why not make a delectable delicacy out of the two.

A friend of mine had just shifted base to NCR after spending a decade in the Silicon Valley of India (Bangalore). Somewhat morose and trying to adjust to the idiosyncrasies of the Jat Land (Gurgaon), Amrita would often call me up. So, one fine day I just dropped in at her place impromptu to give her a surprise.

Well, indeed she was. We both ended up chatting for long when suddenly she came up with the idea, “ lets concoct up something in my kitchen.” So instead of placing an order for lunch, we immediately donned the chef’s hat. Amrita’s kitchen had almost everything. So, we dint have to worry much to make Garlic Chicken along with soy bean rice.

I must say that we enjoyed the sumptuous lunch of Garlic Chicken and Soybean Rice accompanied by some red wine. Yes, though the latter part may sound a little westernized for Indian homes, nonetheless, since we both are gourmets, it goes without saying that the wine goblets exuded the essence of the entire activity – the grand lunch that we had. Here’s the recipe.

Make a paste with ginger, 10 cloves of garlic, lemon juice, yogurt and a pinch of salt. Marinate the chicken in this paste for at least four hours. Now take a heavy-bottomed pan and heat olive oil in it. Keep the flame low. Smash the remaining garlic pods and throw in the oil along with cloves and cardamoms. Sauté for a few minutes. Believe me the aroma released from the spices were absolutely to die for.

Now add the onions and fry till they become translucent. Add the marinated chicken along with cloves and cardamoms and turmeric. Sprinkle some salt according to your taste. Add a little water and cover with a lid. Cook slowly on a low flame while stirring constantly for around 20 minutes. Remove from stove, garnish with coriander leaves and serve hot with rice. 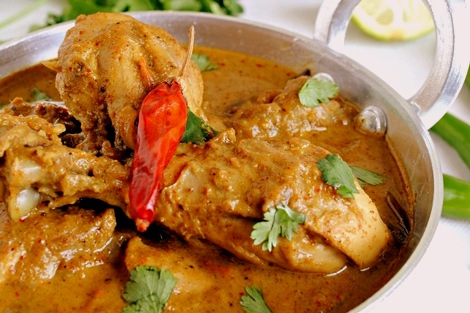 This weekend I had a gala time. My ex-flatmate had been inviting me over to her place in Gurgaon for a long time now. Finally we met after almost a lapse of one year. Now, when two Bengalis meet, food has to make its way into the conversations. So it did. We were so overwhelmed by the fact that, we both ended up deciding that lets cook chicken for dinner. Within an hour the raw chicken arrived and we both arranged all other ingredients in a hurry. I being the gourmet, again dawned the chef’s hat to toss up Kadhai Chicken.

The Kadhai is a not-so-deep or not-so-shallow frying that is idiosyncratic to every Indian kitchen. To know more about Kadhai, you can click on http://en.wikipedia.org/wiki/Karahi.

Capsicum is usually used to make this delicacy, but since we were short of time and of course ingredients, I opted for the simplest way to make this delectable delicacy. Here’s how:

Begin by grinding the red chillies and the coriander seeds into a coarse powder and keep aside. Heat the required quantity of oil in a kadhai and add the bay leaves. After a few seconds add the sliced onions and sauté till it turns brownish. Then add the ginger-garlic paste and fry for a minute; add the above-mentioned coarse powder. Add the chopped tomatoes and pinch of salt. Stir for sometime until the tomatoes blend well with the masala. Now add the chicken pieces and stir vigorously until it mixes well with the masala. Pour a little water and  a pinch of salt and cover with a lid. Cook till chicken becomes tender. Sprinkle some garam masala and turn off gas. Serve with rice or roti. 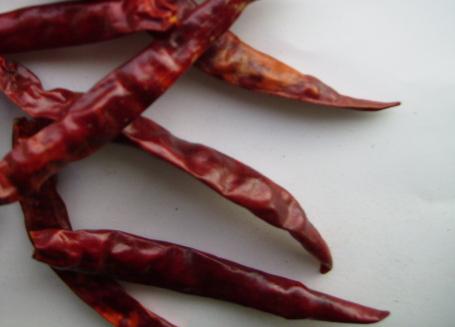 The head of operations stood in one corner and had a huge grin on his face, his entire team were there standing behind him and watching humour unfold in front of their own eyes. I had the ‘butcher’s knife’ in my hands as I tore into a dead chicken. Something on similar lines was being played out on national television that day.

A man lay dead in his coffin, his deep secrets buried into myth with his death, there were faces with grief and shock, sadness and sorrow, anger and frustration. Moreover there were hordes of public leaders playing to the gallery and striking brownie points on the dead man’s soul. The Friday hype did not stop here there were two films that had hit national theatres across India, as Bollywood celebrated 100 years of cinema.

By the time the chicken was cleansed, the blood removed and I with great effort had done the dressing, there were bruises to display all over my hands. Similarly as Sarabjit Singh was laid to rest, dressed in the tri colours, his funeral procession marched towards its logical end, the bruises on the politicians and their act was on display as they tried to save face by shedding crocodile tears. Saltwater was offered in quantity through the two movies that hit theatres on Friday, One emoted tears through the drama that unfolded on screen, the other one made you cry on the decision of watching that movie. 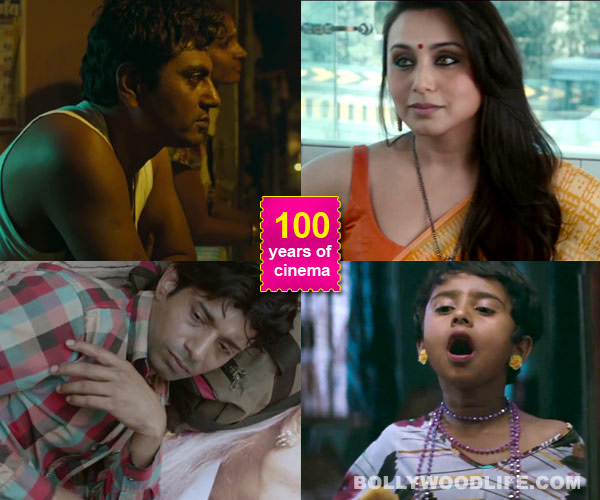 I had shredded the dead meat into fine strips, the other ingredients were finely chopped and I was ready to cook my first Boneless butter chicken inside my own restaurant, quite similar to the funeral that was telecast live on news channels. The media had dissected the entire story of the man and his tryst in Pakistani jails, the state had announced mourning for three days and the central government was ready to give that man ‘National honours’. All the ingredients were in place here too for the final HURRAH!

The film critics had a busy day in office too, as they dissected the dead chickens (Bombay Talkies & Shootout at Wadala) and the audience was ready to lap up the reviews and decide the fate of Bollywood in its hundredth year.

The wok simmered for fifteen minutes, there were murmurs on the fate of the dish that was being prepared, I was nervous like a child is before his results. Likewise the media waited outside single screen and multiplex theatres for the audience reaction on the movies on display, as a twenty one gun salute was fired in the air and the man was finally given national honour.

Three Frauds simultaneously was happening on that fateful Friday, first fraud that ‘I’ could cook better than my team of chefs, second fraud, that the politicians really cared, and the third one cinema itself as ‘Alfred Hitchcock’ had termed it the most beautiful one in the world.

‘Bombay Talkies’ was given thumbs up from the audience, everyone around felt that ‘it was the perfect gift to Bollywood in its centenary year’. My Butter chicken was ready, and the verdict had been delivered, it left a sour taste in the mouth quite similar to the ‘state funeral’ given to Sarabjit Singh.