In the fifth part of the series, Chandan Das explores the farce behind the flood control measures, which eventually led to this large scale disaster!

That though the radiance which was once so bright be now forever taken from my sight. Though nothing can bring back the hour of splendor in the grass, glory in the flower. We will grieve not, rather find strength in what remains behind. – William Wordsworth 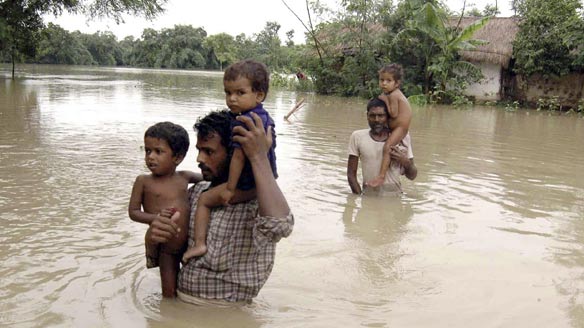 The National Flood Control Programme was launched in 1954. After the 1970s – a decade that saw the worst floods – this spending gradually declined to a low of 5.5 percent in the decade between 2000-2010.The rupees not spent on flood control have meant gigantic national losses!

In 1976, the Government of India set up the National Flood Commission (Rashtriya Barh Ayog) “to evolve a coordinated, integrated and scientific approach to the flood control problems in the country and to draw out a national plan fixing priorities for implementation in the future.” That a large number of agencies in our country are still mentioning the Barh Ayog’s data in their diagnostic statements is an ominous reminder that our level of preparedness is somewhat low!

According to the annual report of Ganga Flood Control Commission (2010-11),  Uttarakhand was allocated a budget of Rs 280 crore, but ironically, the flood management plans ignored the issues of deforestation and environmental devastation!

The report of the 12th Five-Year Plan working group on ‘Flood Management and Region Specific Issues’, shows Uttarakhand’s flood vulnerabilities. Until March 2011, it included the coverage of 2000 hectares, compared to 18000 hectares in Himachal Pradesh. The state has created 9 km of embankment, a fraction of the 159.16 km completed in Himachal Pradesh; it has no drainage channels, whereas Himachal has constructed 11 km. While 82 Himachal villages were protected through the raising of the ground level, none of the villages in Uttarakhand received such protection. In fact, the state government needed Rs. 600 crore for relocating all the villagers, but had only Rs. 50 lakh in their kitty. The Central Government doesn’t mind giving 1000 crore today though (you must be kidding me now !!)